Boat Swimming and Paragliding from the Vogel Mountains

The roads stretched as far as the eye could see. We had been on our tour bus for hours now, seldom passing another vehicle. Along the way, we had stopped off and visited many waterfalls and beautiful glacial landscapes. At 370km east of our starting point, the city of Reykjavík, we were about to experience what is said to be ‘one of the greatest wonders of nature in Iceland’; Jökulsárlón Glacial Lagoon.

As we rounded the corner, I wasn’t expecting the view I was greeted with. I have travelled many times over the years and been to many destinations; from Fiji to Chicago, Sydney to Estonia, Morocco to Vietnam, yet I had never experienced that jaw-dropping feeling, until now. My mouth literally hung open with awe.

Jökulsárlón is a glacial lagoon, bordering Vatnajökull National Park in southeastern Iceland. Its bright blue waters are interrupted by colossal chunks of ice, piercing the surface of the water and jutting out above the horizon. These icebergs come from the surrounding Breiðamerkurjökull Glacier, which is part of the larger Vatnajökull Glacier. The lagoon flows through a narrow waterway into the Atlantic Ocean, leaving crystals of ice on a black sand beach. This beach is known as Diamond Beach and is the most beautiful sight you could imagine. It is littered with glistening icebergs; from tiny little ice cubes to huge chunks of ice, which stand out against the dark sandy backdrop.

“I had never experienced that jaw dropping feeling, until now. My mouth literally hung open with awe!”

Tourism in Iceland has exploded in recent times; so many people I knew had visited in the last couple of years. I finally decided to go myself and see what all the hype was about…

I have never been so excited to be at a destination- I ran from our tour bus, not wanting to waste a second of my time. After I had shot as many images as possible of the lagoon itself, we took a boat trip straight into the centre of the aqua blue waters. While out on the boat, the guide plucked a lump of ice straight from the lagoon, smashed it into tiny pieces and gave us each a piece to try. I had never tasted water so fresh. We made our way back to land with just enough time to visit Diamond beach and catch the last few minutes before darkness fell over this wonderful place.

Many people I have chatted to about Iceland have not visited Jökulsárlón Glacial Lagoon as it is such a long distance from Reykjavík, however, if anyone asked me what my best experience was while in Iceland, I wouldn’t think twice about my answer. 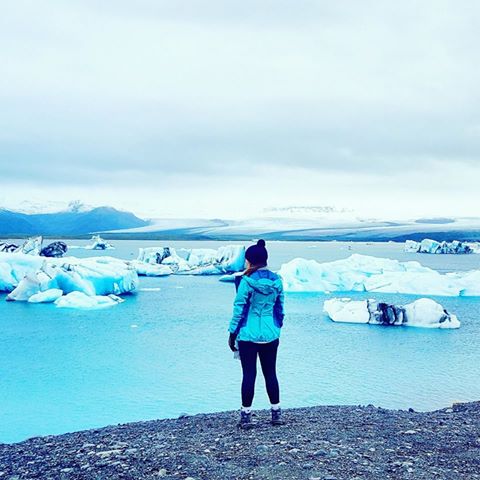 Leanne Muckian
A secondary school teacher from Ireland who loves to travel. 30 countries and counting!

The Incredible Burgers at MeatLIQUOR in Brighton, England

Passing Through the City of Middlesborough

Sheep Shearing at the Agrodome in Rotorua

Will You Survive a Night at Draculas on the Gold Coast

Our Own Private Church Organ Concert