One Week on the Yucatan Peninsula

John stokes the woodstove again. He goes outside to gather kindling and stack more firewood onto the rack, to get ready for tomorrow. He is weary of it. He sits down to watch Team Canada pulverize the Germans in Olympic hockey. At intermission, he presses the mute button. “We need a break from this weather.” He explains that we deserve a reprieve from snow-covered roads, icy windshields, and treacherous driving. “For once, I’d like to live somewhere warm and sunny.”

We are too young to be snowbirds, a term given to retired Canadians fleeing south to Florida every winter, but John insists we deserve to flee the bad weather and its effects on our lives. The lack of public transportation in this enormous country means relying on automobiles, vehicles that slip and swerve in the terrible months of November and March, when the temperature hovers at the freezing mark, layering sheets of ice on our highways. Anything above freezing is rain, anything below is snow, and can be cleared.

“I can get a leave of absence,” John tells me. He pulls up stock photos of Volcán Poás and Tortuguero National Park, both popular attractions in Costa Rica. “I’ll get a teaching job down there.”

We move down in the spring. It was not difficult to find accommodation, but I insist on living away from tourist zones. “I’d like to at least learn the culture and the language.”

We rent a furnished one-bedroom villa on the Pacific side. We experiment with the bus routes. One takes us north to a typical Costa Rican town, where we buy batidos at the mercado (I am doing very well with the Spanish already). Batidos are drinks made of blended fruit and milk and ice. I am nearly frantic, trying to cope with the heat. The icy drink helps. We line up with the others at the bus stop for the ride back. The buses here do not offer air conditioning, and the windows are always shut. Always. It is a sauna on wheels.

Tumbling over potholes the size of craters, I peer out the bus window, down into the Río Tárcoles, and glimpse perhaps twelve dozing crocs sunning on the banks. A headache pings at the edge of my temple. Again. We turn off the highway at a rest stop. John goes off to the bathroom. I order sodas and ask the lady at the counter: “When does it cool down?”
“Ah…mayo, junio.” She waves her hand casually, not even looking up to respond.

I meet John at a plastic table. A quartet of arcade machines draws a crowd of children. They press buttons with one hand, gulp iced tea with the other.

I’m thinking of Katie, an Australian I met in our tiny Canadian town one winter. She’d come over with her husband to spend time with her dying mother-in-law. Tumor in the abdomen the size of a grapefruit, she’d recounted. She’d been afraid to see a doctor when the first pangs hit. After five months, it was too late.

I’d met Katie at the library’s book club. It was late in January, when ice formed on your breath, wafted down inside your lungs, and jolted your heart. The night after a snow squall, she’d called the circulation desk to plead for a ride so she could get out of the house.
“Doesn’t she have a car?” the librarian asked me. “She uses her father-in-law’s Buick while she’s here.”

But the roads were snow-packed, and her down-under upbringing didn’t lend itself to negotiating curves on icy roads. And weren’t we driving on the wrong side?

At the rest stop beside the Río Tárcoles, we climb back on the bus to endure the next hour in the sauna-on-wheels before jolting into our village, a horseshoe-shaped place branching east off the Costanera Sur, Costa Rica’s coastal highway.

Most mornings, very early, wearing just t-shirts and shorts, we eat our breakfast outside on a tiny terrace. The air is cool and damp. We sit facing the ocean but can’t see it from the villa. It is more than two kilometers away. The sun rises from behind us by 5:30 a.m. In two hours, John leaves for work when the heat creeps out of the shadows, and I scramble in defensive maneuvers against its wrath.

Sitting at a plastic table I peck at my laptop, perched on a shelf John has suspended from the ceiling with rope. The oppressive equatorial heat swelters me slowly into incoherence. Mosquitoes, the Aedes aegypti females, with black and white legs and salivary glands laced with dengue, buzz outside the windows. I keep them closed.

At 11:00, I power down the computer. I attempt to play the housewife, but it is impossible. The town shuts off the water supply in the afternoons, so I lie down on the bed, point two fans on my naked body, and watch Gilmore Girls in Spanish. When John returns, I complain.

“Canadian roasting in an adobe oven?” he says, trying to be funny. But I’m sick.

I come down with strange afflictions every two weeks. Stomach cramps feel like gravel wending through my intestines. The episodes seem to occur on days I’ve spent walking along the main street of the town shopping and running errands.
“Too dehydrated?” John asks.

“Very possibly,” I admit. Please let it be that, I worry, thinking of Katie’s mother-in-law.

Quick trips to the local grocer owned by the most affable man on earth called Juan Carlos yield clusters of sweaty droplets on my chest and neck. I do a quick survey of the locals. How can they wear pants on a day like this? Gringos stand out prominently. Matted, wet hair sticks to our skulls like rubbery bathing caps. Our torsos are cloaked in soggy dishrags (formerly expensive summer wear). Now they are hanging limp and loose, soaked up to and beyond the armpit.

Never have I perspired this much. I take bottles of water with me everywhere and buy more on my route. The strange illness characterized by fatigue, lethargy, and headache, as well as the gut pain, plague me by the fortnight.

I try not to worry when I venture out in the midday burn to research tropical maladies at one of the air-conditioned internet cafés. But first, I need cash. I negotiate a three-kilometre trek on the main drag running parallel to the ocean. The tediously long parkway sends up plumes of heat. The air, rising from the road in layers of different densities, squiggles in a mirage of waves, hypnotizing me.

I make it to the ATM, take my cash, stuff it into my pocket and stagger into the ice-cold internet café. Abdominal spasms begin to roil, but I can stave off the headache if I don’t cast my eyes around too quickly.

I plug my symptoms into the search engine and find this: Electrolyte imbalance is a common problem in tropical regions, especially for expats. Sweating occurs at twice the rate of northern countries.

I read on. Symptoms include headaches, lethargy, dizziness, fatigue, and digestive issues like cramps and constipation.

I am relieved beyond words. It is only the heat. Then, I exert myself for the first time in days and sit up, absorbed by what I read next: Probably the single most effective item in your medical kit are packets of salt and sugar known as suero oral. Suero, dissolved in one liter of water, replaces lost minerals and salts from sweating, vomiting, and hangovers.

The road to my recovery, it appears, begins with suero. I heft my bulk out of the chair and walk down to Juan Carlos’s store.
“Se vende Suero Oral?” I ask him.

He points to the packets right in front of me at the cash. “Yes, what flavor would you like, señora?” Flavor? It comes in different flavors? “Sí, naranja, fresa, o coco.” Orange, strawberry, or coconut.

I buy all three flavors and mix the sea-water tasting potion daily. It helps with the sickness.

In the evenings, when darkness descends, and the sun’s fiery tentacles recede, the villagers emerge from their homes and congregate. Some drink cold beer outside Juan Carlos’s; the young ones flip end over end on their skateboards on the main road. Everyone moves slowly and deliberately. I attribute it to two things: the extreme heat and the lifestyle of a people unencumbered by the demands of the nine-to-five world.

“We’re only nine degrees from the equator,” John muses.

I wipe a piece of damp hair away from my neck. It’s been pulled up and wound into a bun since arriving six months ago. I notice the ladies here have a similar hairstyle.

“See?” I point out to John. “They can’t stand the heat either!”
“Or it’s just the style.” He flaps his shirt rapidly, letting in small bursts of air.

We look for mountain towns to visit on the weekend, searching for a cool breeze. We unfold the map on the table and notice the nearest one is a long bus ride away. A long bus ride in a sauna-on-wheels does not appeal, so we fold up the map and put it in the center of the table. John raises his beer and clinks my bottle of Suero. 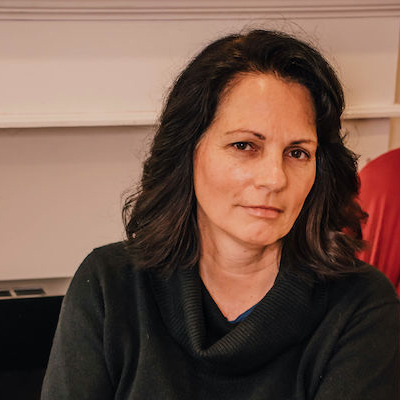 Janet LoSole
Author of Adventure by Chicken Bus: An Unschooling Odyssey through Central America. She lives in Ontario, Canada with her husband and two daughters. A staunch advocate of community-based tourism, Janet has made numerous presentations on the concept to community groups, encouraging people to eschew corporate package tours in favour of supporting local family-owned businesses.

The Great Art The Is Batik Making

Not Even Allowed Tasters at the Wicked Ice Cream Co.

By Far and Away Some of the Best Scones You’ll Find Outside Cornwall!