Day 8, 2017 – Islands of Adventure and the Hogwarts Express

Sometimes, it just doesn’t make sense to get a hotel room. Like if you’re driving a moving truck with everything you own in the back – or you’re trying to beat Salt Lake City rush-hour traffic. I’ve done both of these: in the past month.

Driving for two or three days straight to a destination can leave you feeling tired, not to mention pretty disgusting. When I recently relocated, driving a 26-foot diesel rig from Arizona to Washington State (over 1300 miles), I had planned on sleeping in the cab and just stopping at a truck stop to take a shower. Unfortunately, the movers packed everything I needed at the front of the truck. Needless to say, that wasn’t conducive to showering.

But less than two weeks later, I took another trip from Phoenix in my little sports car. I stayed in hotels the first three nights, as I made some detours through Taos, New Mexico and Mosca, Colorado. But the last night, heading north in Utah, I just wanted to get home. If I’d stayed in a hotel, I would have found myself in the heart of the Salt Lake City morning commute. No thank you. So I decided to try to make it north of SLC by morning. That entailed cat naps in rest areas and at truck stops in a two-seater. Not exactly ideal. I woke up feeling like an accordion with shag carpeting on my teeth.

Sure, now I was north of SLC, but it seemed like I was going to drag my butt all the way home from there – another twelve hours’ worth. What I didn’t realize, however, is what a huge difference taking a shower would make.

I went into the Flying J truck stop and inquired about showers. It is, in fact, quite easy and very convenient. You just go up to the counter and ask for a shower. They charge you twelve dollars, and on your receipt, you will find your customer number as well as the code to a digital combination lock. When your shower is cleaned and available, an announcement will come over the loudspeaker. While I was waiting, I brushed my teeth in the restroom. Before I could finish, I heard: “Customer 19, your shower is ready. Report to shower stall 2.” So, I went to stall number two, punched in the code, and I was in.

Inside the room, there is a sink, a toilet, and a very large shower. I had no idea what to expect, and kind of kicked myself for brushing my teeth in the bathroom when I could have comfortably done it in private right here. I was supplied with a towel, a floor mat (towel), and a wash cloth. Having a voluminous head of hair, this was kind of a problem, since I need an extra towel for that. And be forewarned, they do not include hair dryers. There is a dispenser in the shower with a universal-type gel/shampoo. I didn’t try it since I had my own stuff this time.

Feeling disgusting from too much driving during a road trip? Are you maybe car camping? No money or don’t want to stop at a hotel? This tip from a seasoned traveler can turn your really uncomfortable and unenjoyable journey into a great trip.

The shower was spacious and had great pressure and hot water that didn’t fluctuate in temperature. I took my time, and walked out of there not only clean, but refreshed and revived, ready to put more miles under my wheels. I ended up driving over 700 miles that day – the entire rest of the way home. I know there is no way I could have done so without that shower.

So, the next time you’re feeling bogged down by the grime of road dirt, consider a truck stop shower. I’m hoping not to sleep in the car again, but if I do, you can bet I’ll be looking for a shower in the morning. 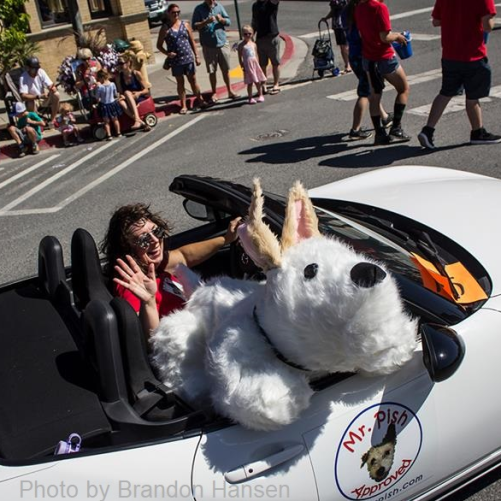 Sampling the goods at the Townsville Brewing Co.

Chomping on Raw Mince at the 7BONE in Hove, Brighton