Visiting the Maji Moto hot springs in middle of nowhere in Tanzania.

A Wonderful Evening Watching Wicked The Musical in London

St. Agnes Bakery. The Tiny Bakery in a Tiny Village in Cornwall

It was whilst down in Cornwall we wanted to try the very best in Cornish pasties, Lee has spent years eating Ginsters but wanted to sample the real thing.  We were CouchSurfing at the time with Alex and Dave and it was them that suggested that of all the places in Cornwall this was the place to go.

The location for St. Agnes Bakery was situated about 7 miles west of Truro.  This tiny little village (for the use of a better word) seemed to have one road in and when you seem to get to the bottom and start to drive out the other side you come to the Bakery in front of you.  Unfortunately, there is only room for one car out the front of the building itself.  We arrived at about 8.00am so was really quiet, parked up and had the pick of the buttery flaky goodness, we will talk about this in more detail next.

I could not wait to dive into these so as soon as we left for Cardiff I devoured the sausage roll, if you don’t like heat then you really don’t want to get this.  You could see the small bits of chilli, but to get your mush around it takes the sort of dislocation only a snake can give.

When we got round to eating the Minted Lamb Cornish pasty, oh my god I think I had just died and gone to heaven.  Unfortunately, I had to share it with Tina (boooooooooooo), but the small slither I had was delicious, you can see from the picture below that you had most of the meat to the edges and the filler as I call it in the main body of the pasty.  The pastry it self was flaky but not so that I ended up wearing it and having a greasy dot-to-dot on my t-shirt.

This was then followed by the biggest coconut biscuit thing ever, it was great being fed whilst driving by Tina made me feel like a king being handed peeled grapes.  It had a crunchy exterior but the inside was so soft and just had the right amount of coconut for me.

There really as very little, in fact lets rephrase that.  Nothing wrong with the food quality at St. Agnes Bakery. 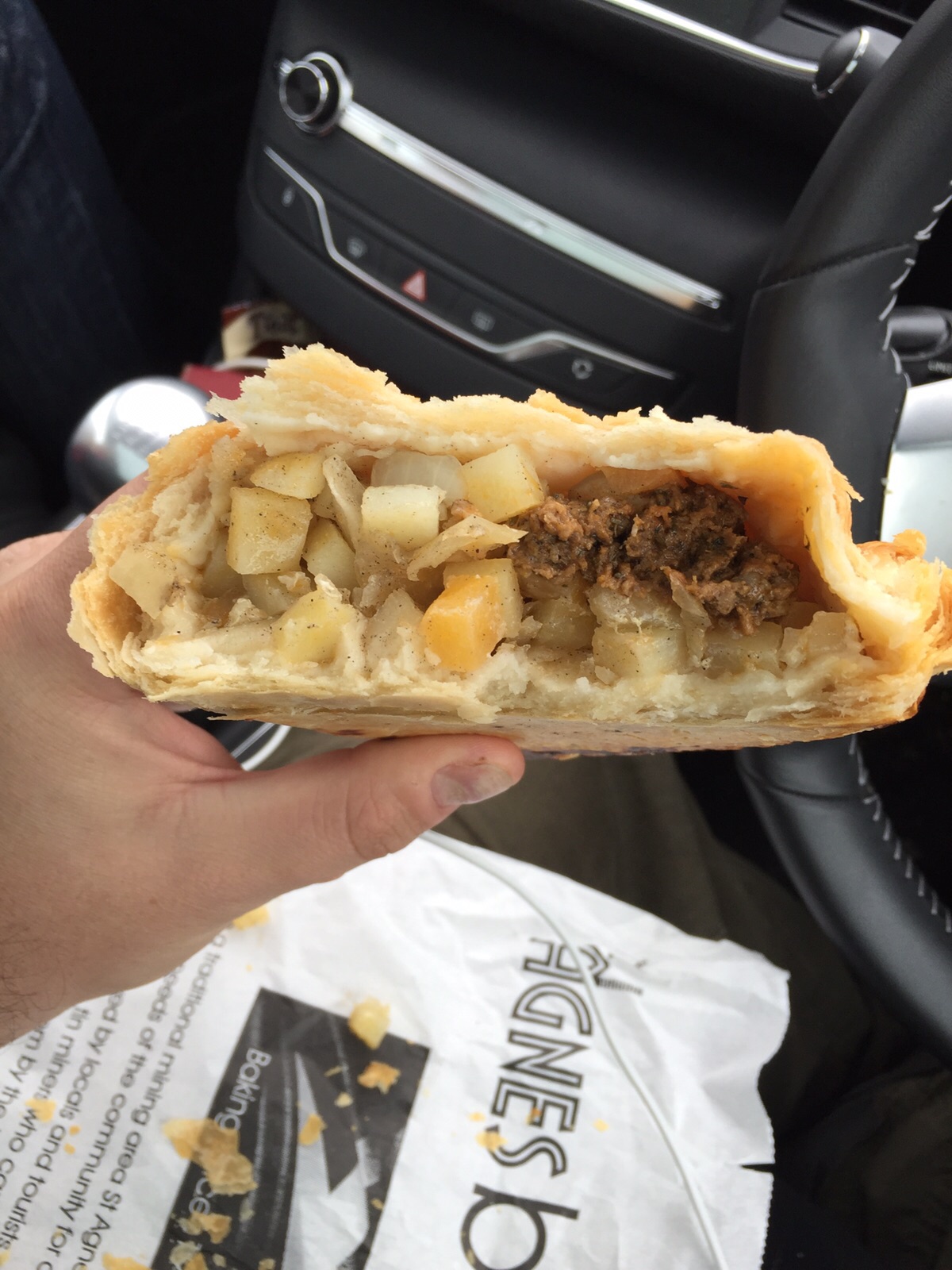 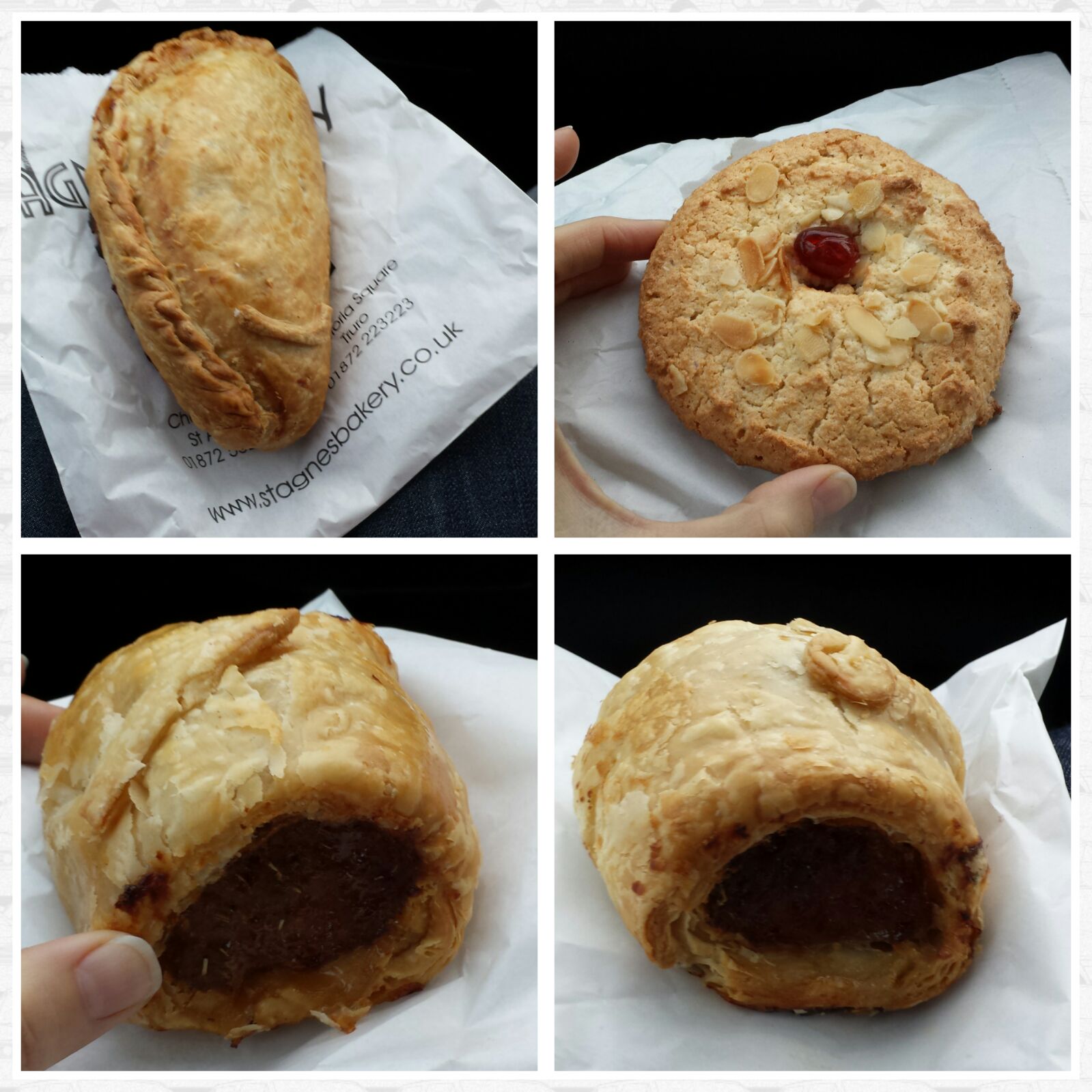 The price for the 4 items was just under £10.00, which seems a lot but in bakery terms is normal.  We didn’t get a breakdown of the pricing itself, but let’s say the coconut thing was £1.50 and then the pasty £3.50 leaves each sausage rolls at £2.90 each which is perfectly reasonable.

The sizes were American sized; you would pay the same price for a English sized pasty anywhere else in the country.

We arrived just after 8.00am there was someone already in there talking to what appeared to be the owner.  She then called out the back for service.  I wasn’t pleased that she was to busy gasbagging and grabbed a young lady from out the back to serve us.  This could have been a supplier or just a regular customer but anyway.

The young lady who served us was very good, very knowledgeable.  Seemed far to bright and alert for an ungodly time of day.

The inside of the bakery though was nice, small and quaint with an overwhelmingly great smell of pastries and pasties.

The Highly Dissapointing Fire and Stone in Covent Garden, London

Normandy, A French Region That Never Disappoint You!