Take a Trip Through Playform 9¾ and Take your Senses on an Adventure.

Durlston Castle and the Jurassic Coast

It was our final meal before leaving with some of Tinas family, and we headed to the Grenadier in Hove, East Sussex.  Tina has a big local family so it was the perfect location, and when booking the table it was no issues at all to book a large table on a Saturday lunchtime.

The place was rammed being a Saturday lunchtime during the football season, matched with good food (we will cover this in good time).  It turned out a good thing we booked the table.

The menu was just your standard pub chain grub though to be honest.  Burgers, Steak, Chicken as well as the classics such as Fish and Chips.  I was (as always) particularly hungry after sorting out the final bits to sell in the morning so was opting for the SKYSCRAPER BURGER, this huge 24oz burger can with the works.  Onions rings, pulled pork, bacon, cheese, and chippies, my mouth was salivating already. 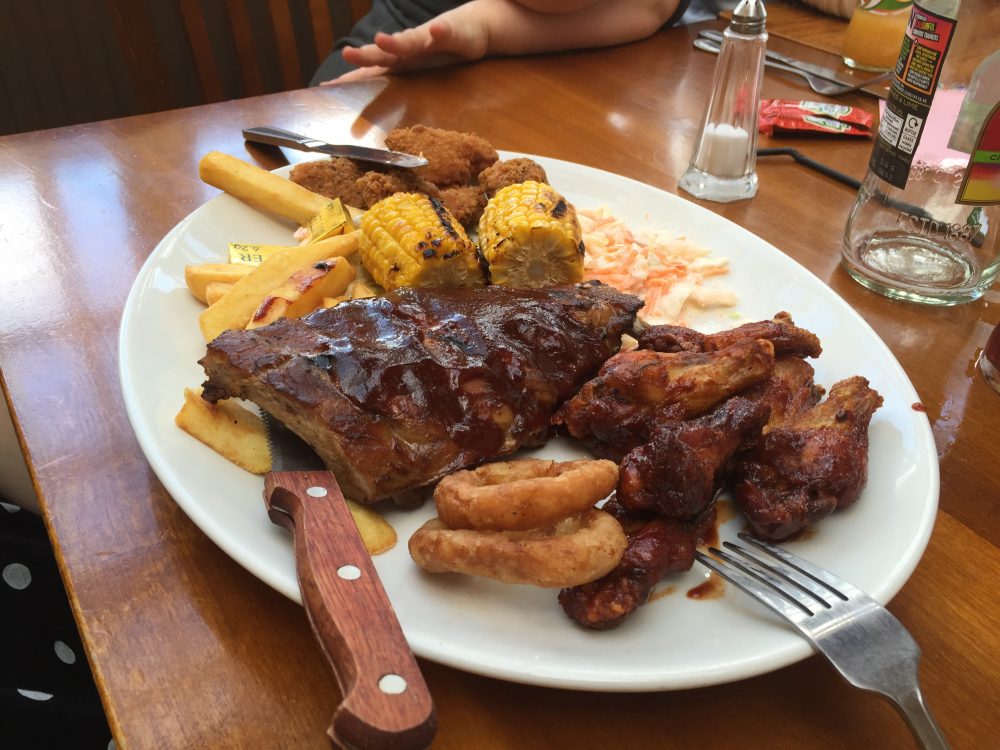 Tina has already looked in the morning and had decided on the All American Platter (ribs, southern friend chicken bites, chicken wings, coleslaw, salad, onion rings and chips.  I had managed to get a £5.00 off when spending over a tenner so that made for a cheap lunch.

Then two bouts of bad news, 1) we couldn’t use the £5.00 off voucher as the number of people eating with us 2 of them had a meal that came with a drink so couldn’t use more than one promotion (you could get around this by ordering in two separate orders if you wanted to but with the size of the order couldn’t be bothered.  Plus we had pudding to order yet). The second and most divesting one was the fact that they did not have any 12oz burgers so could not have the SKYSCRAPER BURGER!  I didn’t even imagine they wouldn’t so didn’t have a backup.  In a rush and fizz choose the double bacon cheeseburger.

You know what, barring in mind it was a Saturday lunchtime, the food probably took about 25-30 minutes.  You know what i was very pleasantly surprised, the food looked great.  Tina had hers come out first out of all of us, the ribs looked good and not smothered in sauce (which i personally hate).  I was so tempted to sample one of the southern fried chicken bites, but was swiftly told “Touch my food, feel my folk”.  There was no way i was going to risk life and limb, i would just bide my time and wait. 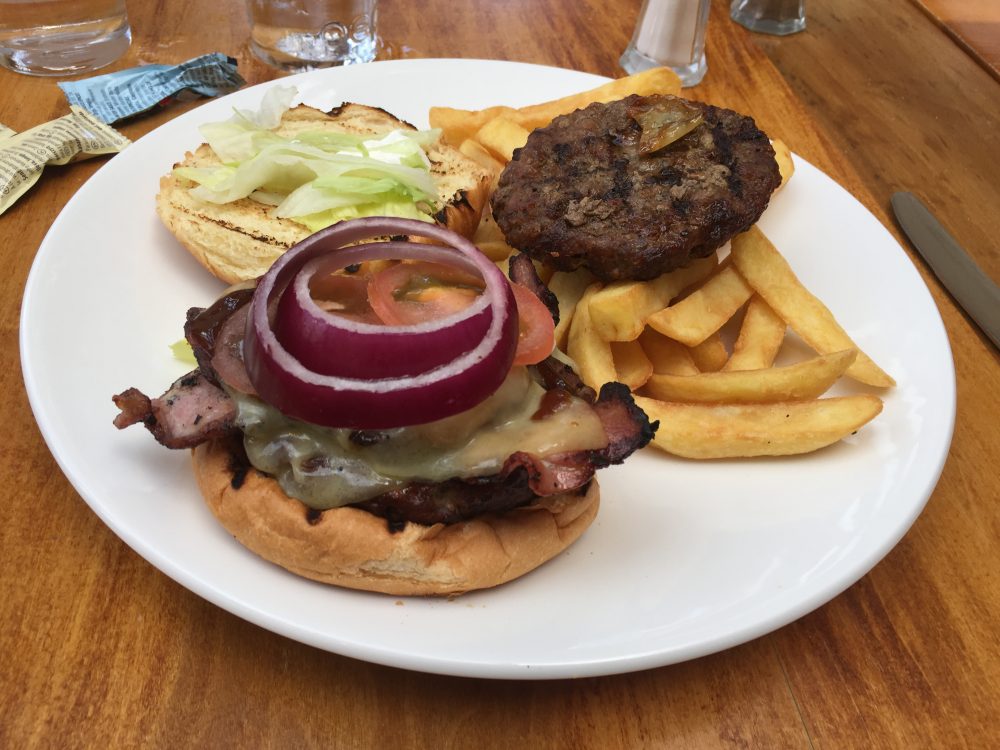 I had to get tints view on her meal, and to be honest she loved it.  The ribs were fall off the bones, the corn one the cob was sweet in taste, southern friend chicken bites were moist and not over cooked.

Mine was nowhere near the size my appetite needed, but the burgers themselves were nice.  Not as good as i have had before but by no means the worse.  They didn’t appear frozen, but one thing i would say was that the bacon was burnt and was attempted to be hidden under the cheese.  It would have worked but there is no hiding charcoaled bacon.  The chips were standard frozen chips, but were ok.  All in all the food was nice, but for my meal especially could have been just a little better.

Time for the pudding stomach to step up.

Of course it would have been very rude not to have pudding, also we had a £5.00 off voucher to use.  So we decided to share a pudding called the Mud Pie Explosion.  With the voucher only meant it cost £2.49, how could we say no.  Even having two operate puddings would have cost more. 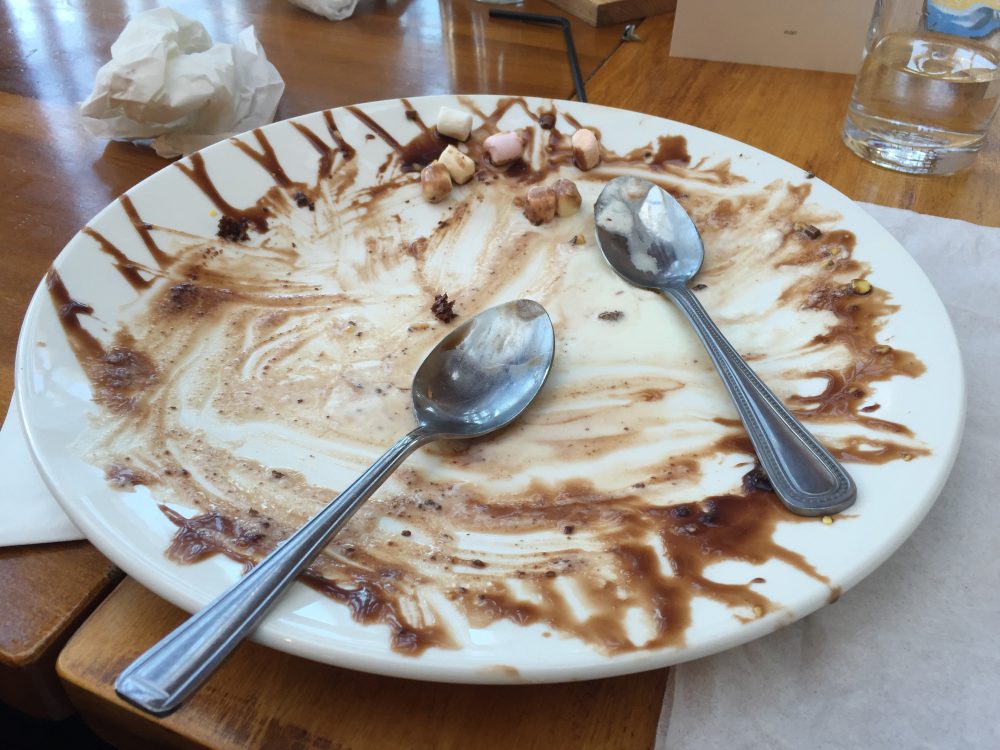 Holy S***, you should have seen our face when this dinner plate.  Oh yes it was a dinner plate the size of a manhole cover.  With this circular disc of chocolate brownie, topped with ice cream, whipped cream and then honeycomb piece, chocolate buttons, mini marshmallows and 3x Cadbury’s Flakes (yes Cadbury’s of so the menu said).

After everyone else had eaten theres we had polished off the whole plate, not even feeling overly uncomfortable.  I am however so glad they didn’t have 12ox burgers after all.

Two courses and a manhole pudding for less than £20.00!

We managed to sign up and get a £5.00 off voucher.  Please find the link below, this however can be taken down at any time and we do not manage or control the contents of the link.

Why not do what we did and get yourself a £5.00 voucher HERE (link correct at time of writing this).

Our Final Family Meal Before Our Next Adventure at the Grenadier PubThe second chain restaurant/pub we have visited. Although the portion sizes were not as big in terms of the mains. The dessert although a sharing one, was ENORMOUS and delicious.
49,896FansLike
17,617FollowersFollow
19,991FollowersFollow
585FollowersFollow
7,423FollowersFollow
95SubscribersSubscribe