The Old Village of Holloko

It was a cold, gloomy Sunday morning in the middle of March, two years ago, today. I had been eagerly waiting for this very day. Even the depressing mid-march weather could not lure me into postponing my trip. Sounds dramatic? A little background to my story might help. During my brief stay in Budapest, I had been looking forward to go to ‘Holloko’ ever since my husband’s mentor/colleague, a kind and graceful lady (refraining from mentioning her name), a Professor at the Corvinus University of Budapest, suggested we make a day trip to the beautiful and ancient village. Located 100 kms from the capital city of Budapest, Holloko is an old ethnographic village in Hungary with Paloc settlement – a subgroup of Hungarians who settled in the northern parts of Hungary and the southern parts of Slovakia. According to UNESCO, it is a ‘deliberately’ preserved settlement, that has continued to maintain its traditions and heritage over the years. This village is an example of rural life in Hungary before the advent of the agricultural revolution of the 20th century. The minute I heard the words ‘ancient’, ‘historic’, ‘traditional’, I made up my mind. I had to visit this village during my stay in Budapest.

It so happens that when you live in a city, you never make a conscious effort to explore the city or the places nearby. There could be several reasons why. One possible reason – you would push off exploring the city knowing that it’s only at arm’s length and you could explore whenever you wanted to or, two – you wouldn’t want to be seen as a tourist in a city you live or, three – you would rather take off to a far and distant place, out of the city for a vacation rather than visit the places nearby. I am no different. As a resident of Budapest, after weeks of postponing the much awaited trip to Holloko, finally the day arrived.

Now, back to my story. The day started out as it always did – me rushing my husband to get a move on and him, taking his own sweet time to get ready. After minutes of running around, packing, yelling at each other (mostly me at him) which felt like hours, we finally left home. Not surprisingly, we ended up reaching the bus station a mere 5 minutes before departure and given that we’ve never set foot at this bus station, I was sure that we’d miss the bus considering we’d have to first locate the ticket booth, then buy tickets and finally locate the bus. It was impossible to get this done within the time we had. Lucky for us, the bus was delayed by 5 minutes. We had some additional time to spare during which we enquired about tickets at the information booth and found out that the tickets could be purchased from the driver once we boarded the bus. Glad that we didn’t have to wait in a line to buy tickets, we headed towards the terminal where the bus would arrive and found a group of expectant tourists eagerly waiting at the stop. What a relief. Five minutes later, we were in the bus, having just bought our tickets from the driver, sitting peacefully and looking forward to a beautiful day out.

As the bus snaked through the rural parts of Hungary, we were greeted by lush flora, tiny hamlets with a church for every hamlet, peasant cottages, rugged hills and just like that, around 2 hours and a half later, we reached the tiny hamlet of Holloko. The driver called out to us since we had requested him to let us know when we arrive. As we got down, he mentioned that we’d be picked up at the same spot at 4 in the evening. After making a mental note of the time and thanking him, we got down, eager to look around.

We were first greeted by a row of the traditional Pavloc houses of Holloko and a church with a wooden tower, right at the village centre. After spending some time looking around, and walking through the streets, we came across a beautiful old-fashioned well, made entirely of wood, that continues to be used by the inhabitants to draw water. Once we were done looking around on ground level, we decided to walk up the hill to the majestic castle ruins that rests on top of the hill. There were signboards along the way that guided us to the top. After paying a meagre entrance fee, we started our climb. Once on top, we had a beautiful view of the village fields along with a few other hamlets spread across the area.

The castle also housed a few ancient weaponry and other artefacts. Having spent some time looking around the castle, we decided to walk back down to the village.

It was close to 1:30 PM and we decided to have lunch. Being vegetarians, we didn’t have much choice. We had a platter of baked potato and beans and a cheese sandwich. But those who aren’t vegetarians have plenty of traditional dishes from the Hungarian cuisine to choose from. After filling our stomachs, we poked around the houses, some of which were converted to museums that displayed ancient artwork and some of them that had inhabitants dressed in traditional Hungarian costumes, displaying their craftwork – pottery, doilies, traditional Hungarian dolls, ornamental boxes, porcelain, etc. To take back as a souvenir, I bought a few white doilies – an ornamental table top decoration made of fabric – from an old lady for a few 100 Forints each. We spent some more time at the ‘houses-museums’ admiring the handicraft and the artwork. After an hour or so of looking around, we decided we were done for the day.

We then spent our last half hour lying on lawn grass near the drop-off point, waiting for the bus and admiring the bright blue sky. I’m quite sure the weather reflected my mood. What began as a dull gloomy day with a lot of hither and thither ended up as a peaceful and happy day as indicated by the bright blue sky. I couldn’t help but be thankful that the bus that morning was delayed by 5 minutes or I wonder, if I would have had a chance to visit the beautiful hamlet called Holloko.

How to get there?

Hike up to the castle ruins: A 10-minute hike above a hill

The traditional rural houses of Holloko 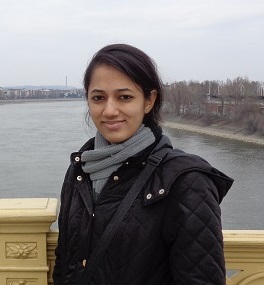 Archana Narayananhttp://www.summerof2015.co
A customer insights analyst by profession and a travel writer by passion.

What to do when you only have a day in York

A Paradise in the Midst of a War Zone they say

The Shocking Juggs Pub just outside of Lewes, East Sussex